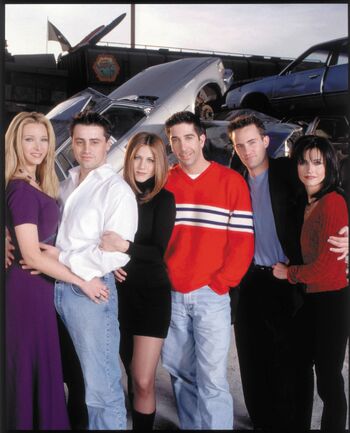 This season took on a significantly greater serialized format.

Rachel meets Mark Robinson, who helps her to get a job at Bloomingdale’s as their employer’s second assistant. Ross immediately becomes jealous and suspicious of Mark, convinced that Mark only helped Rachel to get the job so he could steal her from Ross. Ross’s jealousy provokes Rachel to the point where she tells him that she thinks they should take a break, something that she immediately regrets. Ross and Rachel get back together, only to break up once again when Rachel discovers that Ross slept with the hot girl from the copy shop, Chloe. His insistence that he and Rachel were “on a break” becomes a running gag through the remaining seasons. The two show significant animosity towards each other through the second half of the season, though the cliffhanger ending suggests the two reconcile. Interestingly, the first episode after they break up does not focus on the two of them, but on Chandler, who’s having a very hard time dealing with the situation, as it reminds him of his parents’ divorce.

Phoebe, established as having no family except for an identical twin sister, becomes acquainted with her half-brother, Frank Jr. In the season finale, she meets Phoebe Abbott, the birth mother she never knew she had.

Joey develops a crush on Kate Miller, his acting partner in a new play. At first, she doesn’t harbor feelings for him, even after sleeping together. After her boyfriend/director dumps her following a scathing review of the play, she turns to Joey for support. The relationship doesn’t last long, as she is given an opportunity on a soap opera in Los Angeles.

Monica begins a relationship with Pete Becker, a millionaire who has a crush on her. At first, she only sees him as a friend. But eventually, he wins her heart. Monica prepares for what she thinks is a marriage proposal, but is disappointed when Pete confides in her that he wants to become the Ultimate Fighting Champion. After seeing him get beat up badly in two matches, she tells him he has to give it up. Since he won’t, she breaks up with him.